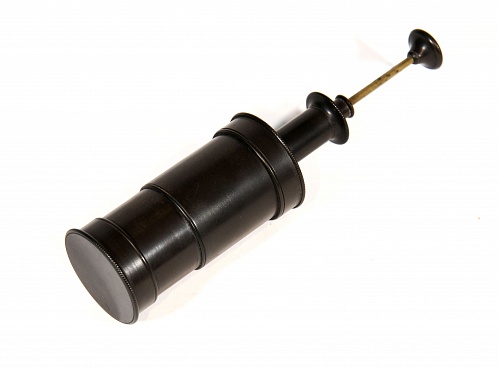 Description: 8” device, composed of a large cylinder 3.75“x 1.75”, a smaller 2“x.6” and a plunger. All made of a natural plastic except the plunger which is made of brass. A cap can be removed from the large cylinder to reveal 35 needles in three circular rows which are advanced by pushing the plunger. The theory of counter irritation led to the invention of many devices, the most famous of which was Baunschiedt’s.. They were used dry or sometimes an oil was placed on the skin to help raise blisters to release the forces that were causing the illness. Unlike many of these devices, which are activated by a spring mechanism, this is used with manual pressure. The smaller tube is gripped with two fingers to hold it and the thumb can be used to press the needles into the skin to the depth desired.