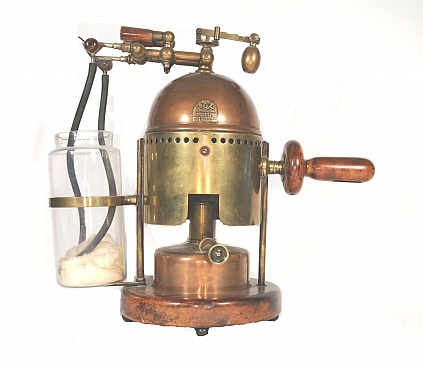 Description: 7“x6.5“d brass boiler with weighted valves on top. There is a shield embossed on the tank Arnold and Sons, 35 West Smithfield, London. There is also a screw to fill the tank and two 6” valves with handles to turn on and off and spray jets at end as well as a connector on each to a rubber tube which sits in a 8“x3.5” pontilled jar that would hold the carbolic acid. The whole unit sits on a wooden base with a burner mounted between base and tank. This is an extremely well made example of this device with a heavy wooden base, handle and well made cannister for the steam with fine jects and valves. Most of the devices were not as elaborate or well made.

The man credited with the concept of asepsis of wounds is Joseph Lister, a London physician born in 1827. He moved several times as he advanced in the medical establishment and while working on suppuration and gangrene he came to the conclusion that infection resulted from contamination of the wound. In 1865 he used a solution of carbolic acid to help treat a compound fracture while working at an infirmary in Glasgow. Iniitially the wound was swabbed with a sponge soaked in carbolic acid solution and most of the objects that might come in contact with the wound were treated similarly. His method was first published in the Lancet in 1867 when he had studied sufficient patients to support his theory. Like most great discoveries the concept of asepsis was at first rejected by many in the medical establishment. The carbolic spray was introduced by Lister in 1870 to purify the atmosphere during surgery in an effort to achieve a totally germ free environment. The spray itself is a highly irritating solution and soon gave way to other and better methods of achieving asepsis.