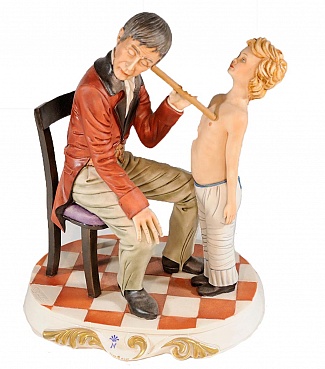 Description: The sculpture shown here is a depiction of Laennec examining a child. It is based loosely on his description of the invention of the stethoscope from his text in which he states: “In 1816, I was consulted by a young woman labouring under general symptoms of diseased heart, and in whose case percussion and the application of the hand were of little avail on account of the great degree of fatness. The other method just mentioned being rendered inadmissible by the age and sex of the patient, I happened to recollect a simple and well-known fact in acoustics, and fancied, at the same time, that it might be turned to some use on the present occasion. The fact I allude to is the augmented impression of sound when conveyed through certain solid bodies, – as when we hear the scratch of a pin at one end of a piece of wood, on applying our ear to the other. Immediately, on this suggestion, I rolled a quire of paper into a sort of cylinder and applied one end of it to the region of the heart and the other to my ear, and was not a little surprised and pleased, to find that I could thereby perceive the action of the heart in a manner much more clear and distinct than I had ever been able to do by the immediate application of the ear.” The artist as substituted a young boy for the young woman described in the original and shows Laennec holding one of the earliest versions of the stethoscope that followed the original folded paper..