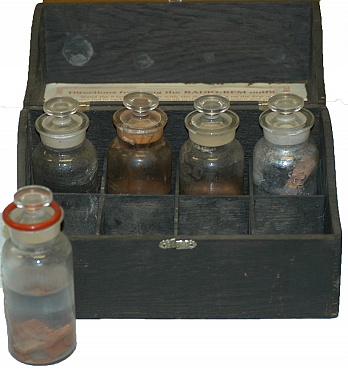 Description: The device is called a “Radiorem Outfit“and originally consisted of eight bottles in a simple box, of which five are still present. The bottles contain a brown solid material in the bottom, which is radioactive, and they are filled with water. The stoppers are frozen and we have been unable to check the contents directly without danger of breaking the bottles.T he directions read “Stand the 8 bottles in a row, with the ring marker on the first one. Put one rod in each bottle. Fill them all to the brim with water and press in the stoppers so that air is excluded. Drink 2 bottles every day, one during or after each morning and evening meal, drink slowly from the bottle to avoid shaking. Refill and replace it in line and put the ring on the next bottle each time. After four days the eighth bottle will be reached and thereafter each one in turn will contain a charge of radium emanation equal to that of the stronger natural radioactive springs. Made by the Radium Therapy Corporation.“The radiation from the box and its contents is almost immeasurable at a few inches. The outfit was marketed by Schieffiin and Company, New York that was founded about 1880.. This was a legitimate pharmaceutical company . Also shown is a box containing a radiorem stone that is identical to the tiles in the bottom of the bottles but much more potent.