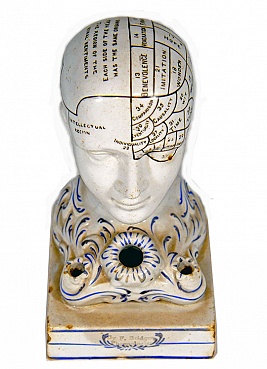 Description: This is a relatively uncommon porcelain inkwell in the form of a phrenology head. 6” high on a base 3“x 3.25”. It has the usual markings on the skull. An inscription on the base “By F.Bridges, Phrenologist.”. The inscription is embossed and a lot of the ink has worn off. The much more common full size head is shown on this site also. Although occasional reproductions of the inkwell are found, reproductions of the full size head are very common and care has to be taken to be sure one is authentic. Wear at the base is a helpful guide.
Phrenology was very popular in the late nineteenth century and early twentieth. The concept was popularized by O.S. and L.N. Fowler. Their book was sold with many engravings, the reference cited here was published in 1859. There were earlier monographs on the subject including a small pocket edition “The Phrenologist’s Own Book” that contained brief directions and illustrations. That version was published in 1849 and was copyrighted in 1841 by James Kay, Jun. and Brother. Synonyms for Phrenology are Cranioscopy and Craniology. Its invention is attributed in 1796 to Dr.Franz Joseph Gall of Vienna. Fowler must surely have been its greatest populist. They advocated the concept that a persons personality and character could by ascertained from the bumps on the head and attributed specific locations to specific traits.